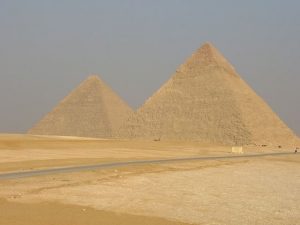 John descended into the heart of one of the Great Pyramids. To enter, he had to climb the side of the pyramid to the opening in the rock high above the ground. Now, he walked down a slippery slope to the bottom of the pyramid. The ancient Egyptians who built this made the interior like a maze, to make it difficult for thieves seeking the treasures buried with the pharaoh, to find their way. Not only that, but they included a fake burial room to make it seem as if the pyramid was empty. John knew these secrets, and easily maneuvered his way to the real burial place of the pharaoh. Of course, the body and coffin had long been removed by the Egyptian Museum in Cairo, but John suspected there to be more secrets hiding underneath the surface. The Ancient Egyptians thought that the spirit of the deceased lived on, which is why they left a small hole near the top of the pyramid for it to escape. They believed that the person’s spirit, or that person’s ba, would take the form of a bird and fly to the sun god Ray. However, John knew that the Egyptians also might like sort of an insurance policy, in case the hole somehow got covered. He thought that there may another way out. John studied the extraordinary hieroglyphics scrolled across the walls. He was one of the few people that could read them, but even to him, the message was cryptic.

Fall to the waiting darkness below,

chose the way in which you’ll go,

beware the dangers that lay ahead,

for the gods may want you dead.

John ran his hands along the wall feeling for any more clues. As he did, he pushed against some sort of door, that opened as he felt it. He fell forward and the door closed behind him, enveloping him the hungry, waiting, darkness.

6 thoughts on “The Secrets of the Pyramids”