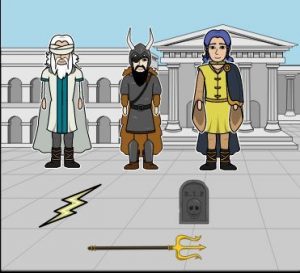 You have fallen through a mysterious portal and ended up in Ancient Greece. There, you are met by Zeus, Poseidon, and Hades. You learn that they can help you get back to modern times if they believe you are worthy of such magic. To make them believe you are, you have to appease them by giving them the correct artifacts. However, it is a lot more difficult than it seems. You haven’t read enough about the Ancient Greek gods to know which is Zeus, which is Poseidon, and which is Hades. And to make matters harder, they will only let you ask them three yes or no questions, with each one addressed to any one of the gods. You also know that Poseidon always tells the truth, Hades always lies, and Zeus is always random. There is an even bigger problem though. You have figured out the Greek language enough, but you don’t know which of the two words nai and oxi means no, and which means yes.

How are you supposed to figure out which god is which?

Based off of the riddle created by Raymond Smullyan and George Boolos. Credit to Alex Gendler.

Solution: DO NOT READ UNLESS SOLVED

At first, this riddle may seem impossible. What’s the good of asking a question if you can’t understand the answer? It is possible though, and the trick is crafting your questions carefully so that any answer if useful. First, to work our way around not knowing what nai and oxi mean, we put them in the questions, and by making the questions hypothetical, it will not actually matter if the god is lying or not.

Example: If I asked you blah blah blah, would you say nai?

Here is the logic. If you asked a god, “if I asked you, does 9 – 4 = 5, would you answer nai?”. If nai means yes, Poseidon would answer truthfully, and say “nai”. What if we asked Hades? Well, he knows that he would lie and answer oxi, so he lies again and replies, “nai”.  In his mind, he’s thinking, “I know I’d lie and I’d say oxi to 9 – 4 = 5,” which is why he lies again, giving the same answer as Poseidon.  If “nai” means no, then Poseidon and Hades would still both answer “nai” for there own reasons. If you’re confused, think about it like integers in math. A positive times a positive equals a positive, and a negative times a negative still equals a positive. 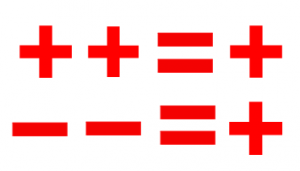 Now, we know that asking either Poseidon or Hades will give a definite answer, but what about Zeus? This logic doesn’t help us with Zeus, so our first question should identify a god that isn’t Zeus. Then we identify whether that god is Poseidon or Hades. Finally, once we know that, we just ask a god to identify one of the others.

Now, let’s actually start asking! Look at the picture to help you visualize. Ask the god in the middle, “If I asked you whether the god on my left is Zeus, would you say nai?” If the answer is nai, we now have two possibilities. You could be talking to Zeus, in which case the answer means nothing. But if not, you’re talking to either Poseidon or Hades, and we know that wielding the answer “nai” means your question was true, in which case the god to the left is actually Zeus. Either way, you can now be sure that the god on the right is not Zeus. If the answer was “oxi”, we know the god on the left is not Zeus.

Next, go to the god who you have figured out is not Zeus and ask, “if I asked you, are you Hades, would you answer nai?” Now, because you don’t have to be precarious about the random answer factor, either answer will give its identity. If he answers nai, than logically, he is Hades. If he answers oxi, he is Poseidon.

Finally, now that you know whether that God’s answers are true or false, ask the same god, “if I asked you, is the center god Zeus, would you answer nai?”. Using the process of elimination, you can identify the remaining gods.